Nitro Cold Brew Coffee is an in-trend caffeinated drink nowadays. The chilling smooth glass of coffee that looks like Guinness (if you take plain) that hinted with a sweet aftertaste; ahhh, that’s a soothing one. 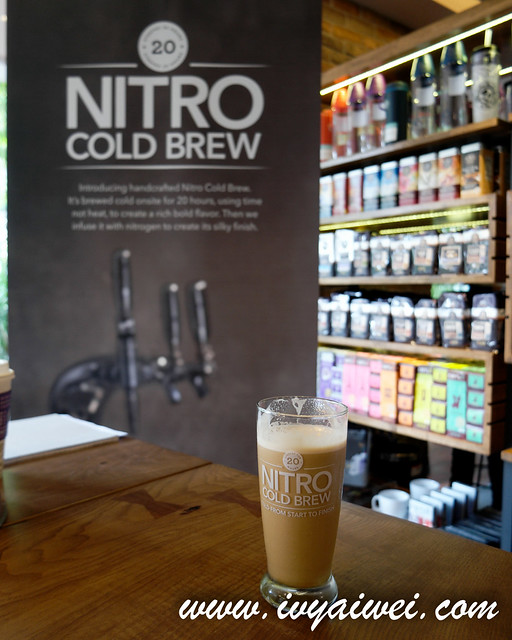 Using an exclusive Special Blend of premium Bali Blue Moon and Ethiopia Yirgacheffe coffee beans, plus chicory for a sweet and spicy effect, there you are the silky, smooth, creamy glass of Nitro Cold Brew.

It was first introduced in selected CB&TL stores in 2016 (I didn’t know that!). It was even voted as TimeOut KL’s Best 5 Nitro Cold Brew Coffee! Many thanks to Coffee Bean & Tea Leaf for inviting me over, to taste the CBTL Nitro Cold Brew and I’d enjoyed myself and the coffee during the event. 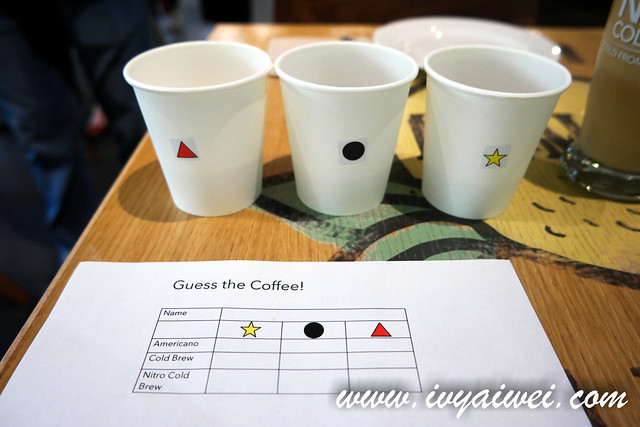 We were assigned with a tasting session before the start of the event and we had to identify which was Americano, cold brew and nitro cold brew. The flavour and texture were pretty obvious if 3 of them were in the line together. 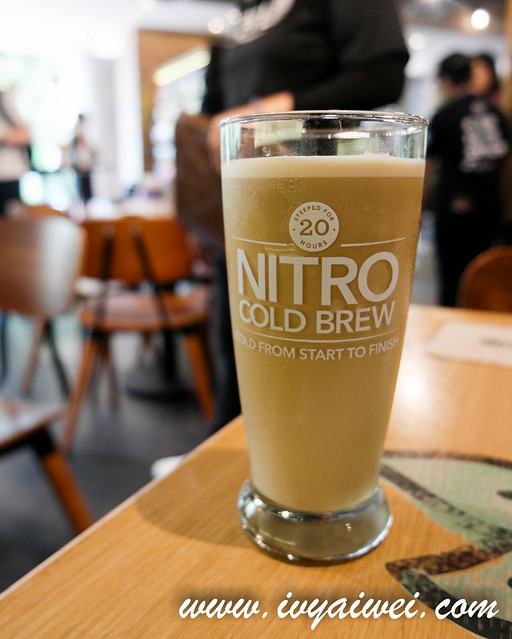 Nitro Cold Brew Coffee is actually steeped for 20 hours then infused with nitrogen for an ultra-silky finish. What’s more, the nitrogen enhances the natural sweetness of coffee, giving it subtle tones of sweet toffee and caramel; you may enjoy it without adding in sugar! Yay, off those sugar calories. 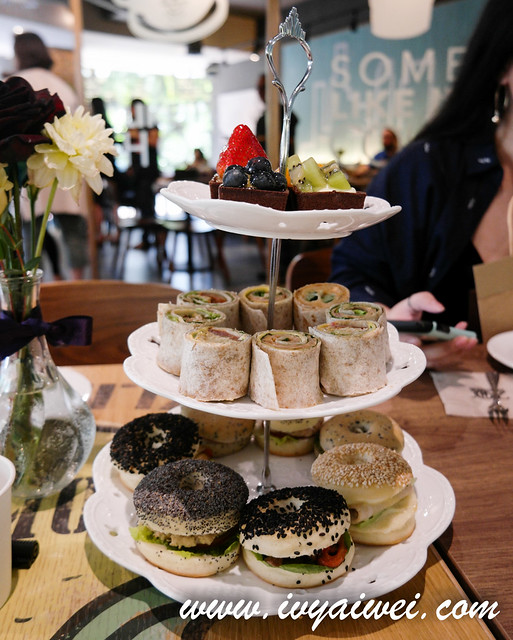 We also had fun making our own version of Nitro Cold Brew Coffee during the Hands-on Barista Experience after some savouries and sweet served by CBTL. Oh wow, being a barista myself is always my dream. Glad to be given this chance, standing behind the counter and pouring out the fresh Nitro Cold Brew from the tap! 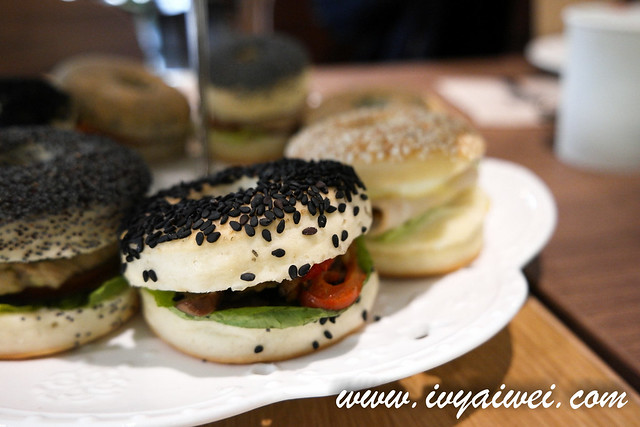 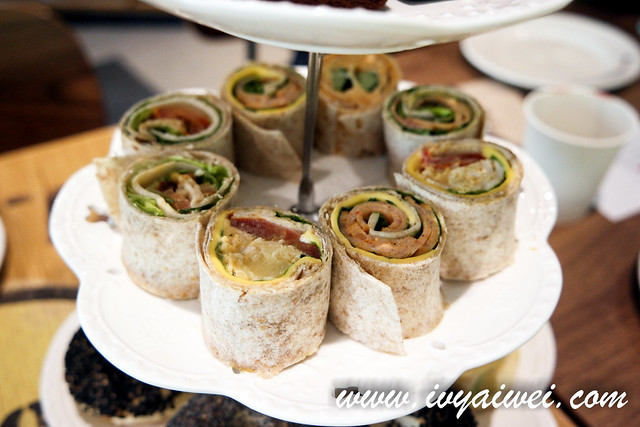 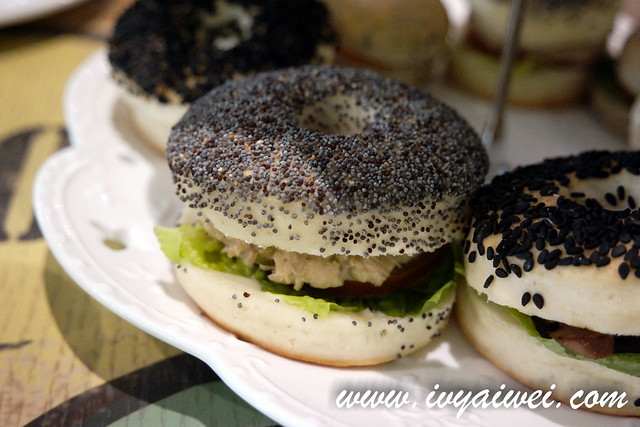 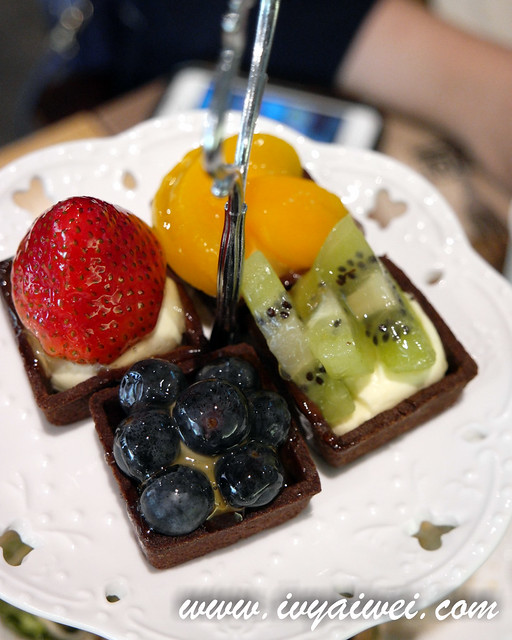 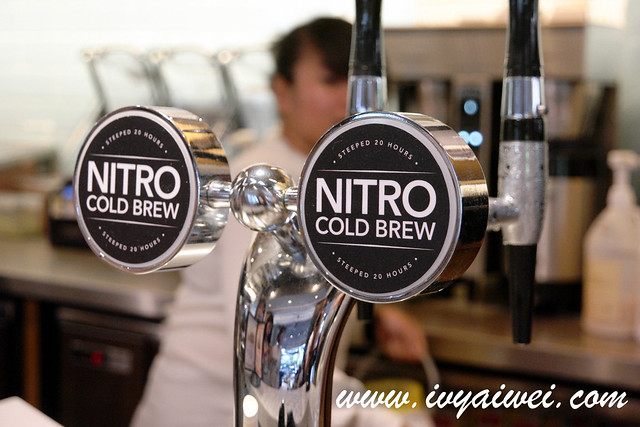 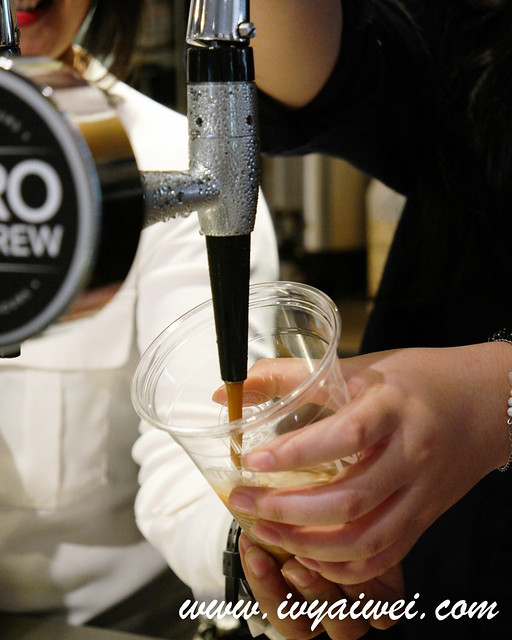 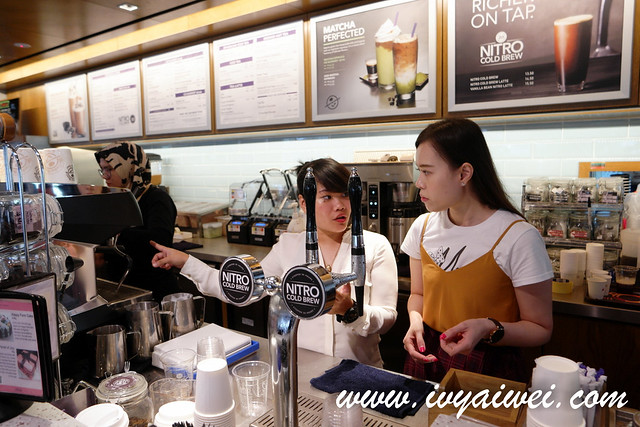 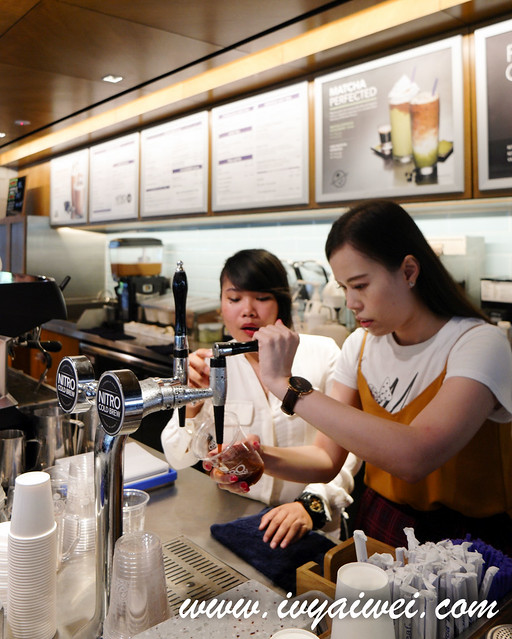 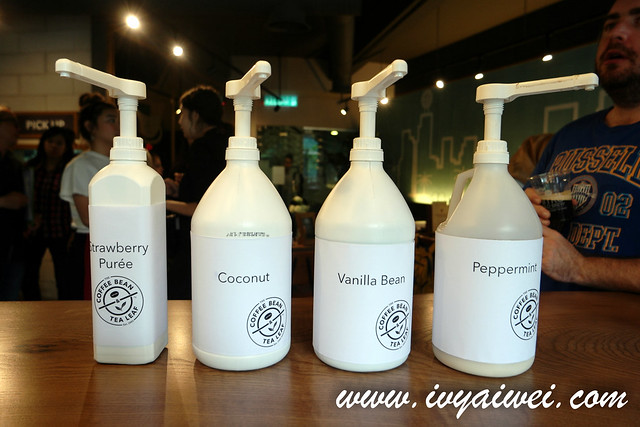 Then, mix with your choice of flavours: strawberry puree, coconut, vanilla bean, peppermint, orange juice or follow the given recipe. 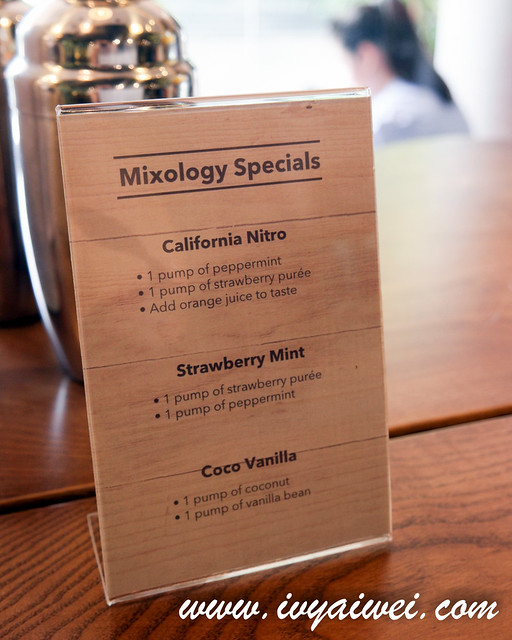 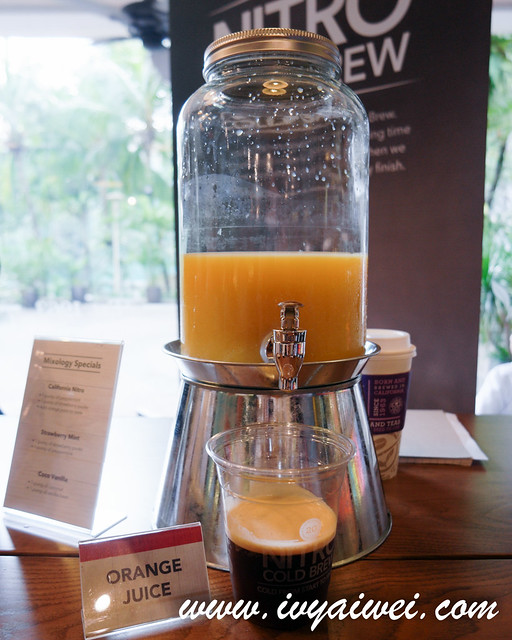 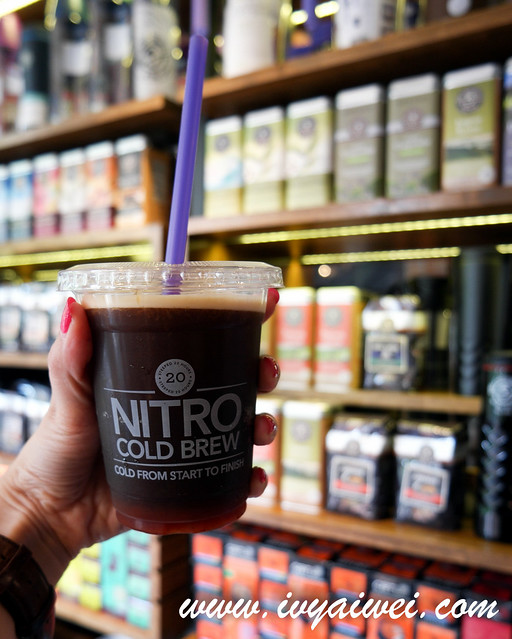 I had mine with orange juice and strawberry puree for the fruity flavour coffee. And finally top up sufficient quantity of nitro brew from the tap again. I didn’t know nitro cold brew and orange juice works so well! Never know they are so compatible; the citrusy of the orange juice brought out the sweetness of the cold brew with extra smooth texture. Try it out and you will know what I mean. I actually had “caffeine-high” after this session with numerous trial on my nitro cold brew. 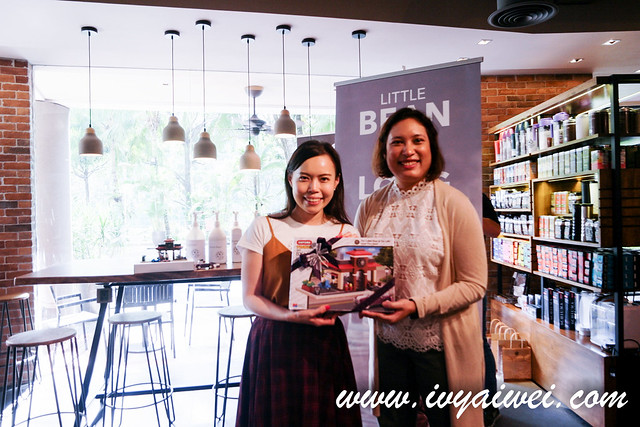 Last but not least, there was a lucky draw session and yours truly won this gift! Thank you very muchie!!! Guess I am the first few who manage to play on the Limited Edition The Coffee Bean & Tea Lead Drive-Thru Set. It is available online now at Rm 130. Perfect for Xmas gift 🙂 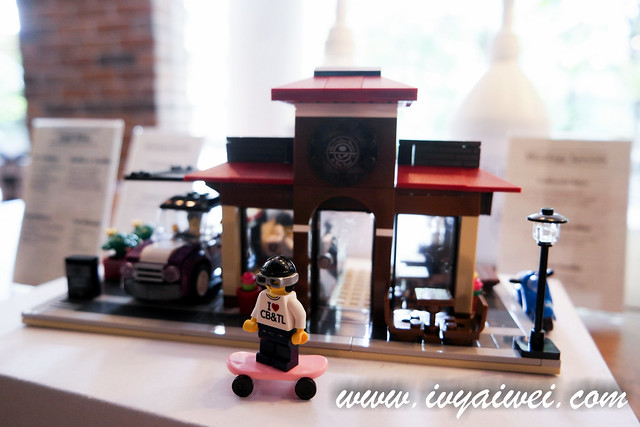 So make your way now to Coffee Bean & Tea Leaf for your glass of Nitro Cold Brew. It is available either in plain or as latte at the price of Rm 13.50 and Rm 14.50 respectively. Or enjoy it in Vanilla Bean or Mint at Rm 15.50. I love mine as Latte!