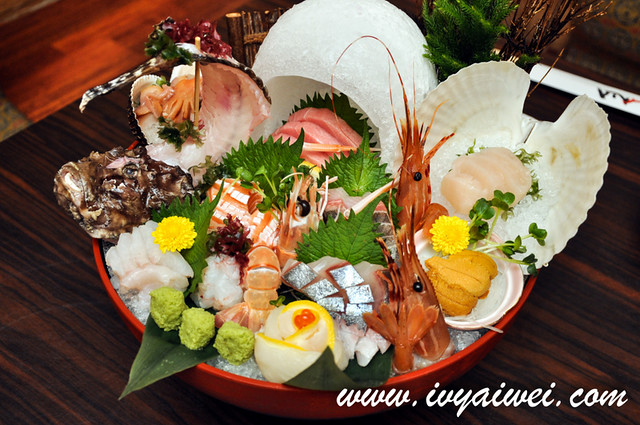 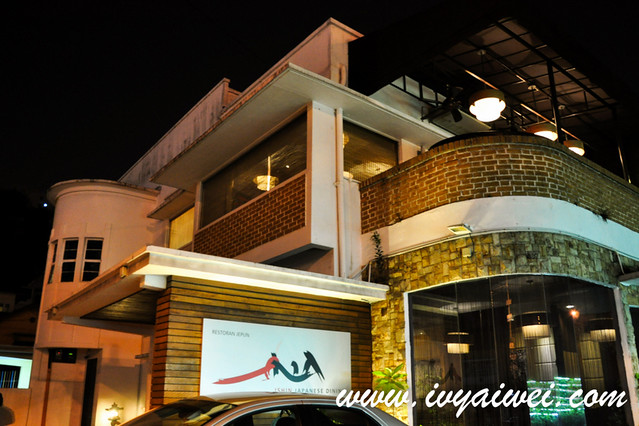 A long standing Japanese restaurant established since year 2009. It is nestled in a bungalow of Old Klang Road, serving authentic Japanese cuisine as well as the Kaiseki ryori (a traditional multi-course Japanese dinner) using the freshest and finest ingredients air-flown from Japan. The interior is pretty posh looking; with a round sushi bar at one end, cater for patrons who fancy observing how their fresh cuts and sushi are made. There are tatami private seats in the house too, for patrons coming here in a big group. 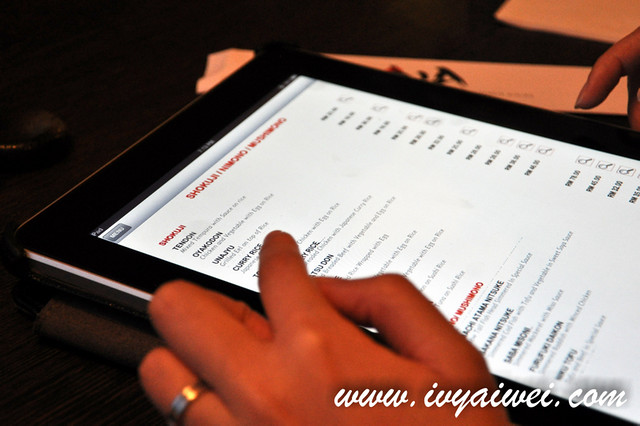 Menu here is pretty up to the technology; pages of tablets that comes with colourful and lively photos. 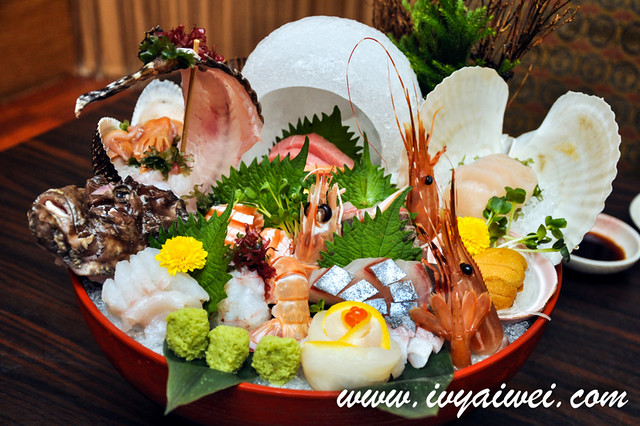 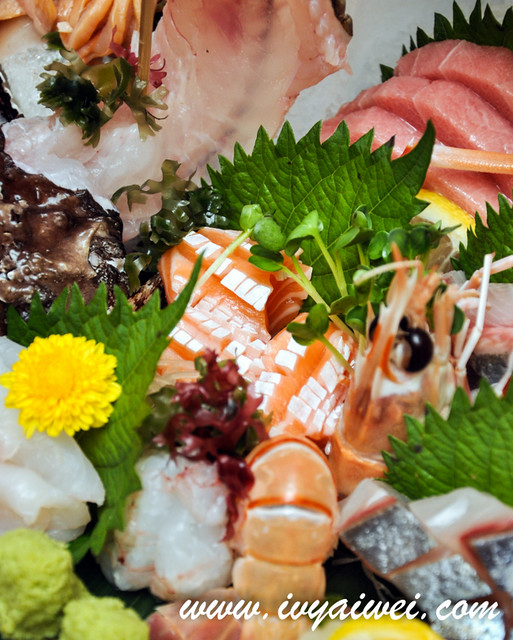 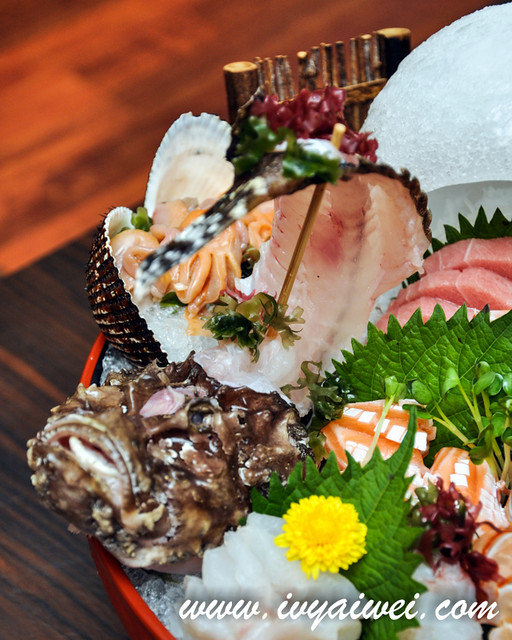 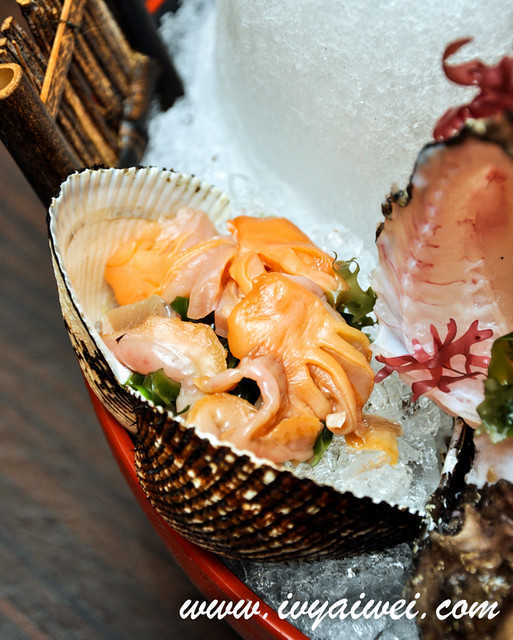 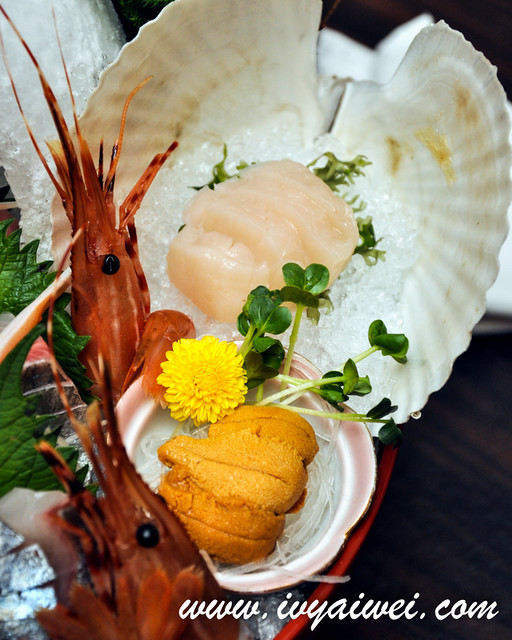 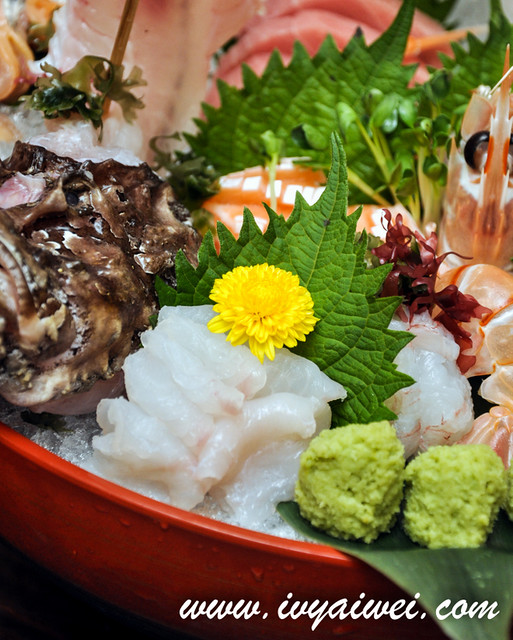 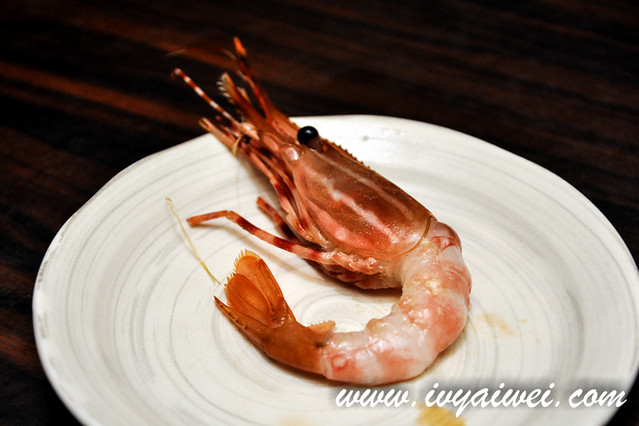 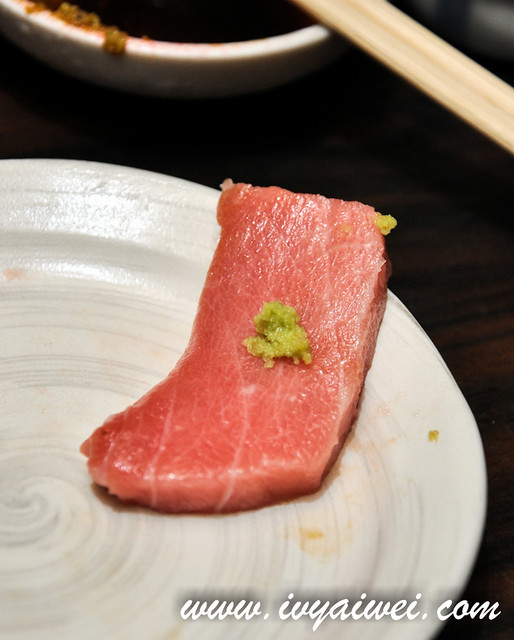 Basically, the whole platter was something new to me. Most of them I have not even tried on. The Sujiko caught my attention (which is also found in latter dish). It looked like ikura but why is it named as sujiko?!

Ikura and Sujiko are both salmon roe. However, there are difference in terms of texture and mode of preparation. Sujiko is salted salmon roe when it is still in the sac. Sujiko remains intact inside the sac while being marinated. It is marinated with soy sauce, mirin and fish broth mixture after removing the blood with soaking in mild salt water. As for ikura, the salmon roe is removed from its sac before processing/marinating. Here in Ishin, the chef will soak the sujiko in luke warm water and gently squeezing and removing the roe from the sac and continue marinate and finally storing to ensure its freshness.

Sujiko normally appears in red or dark red while ikura appears in bright orangey red. Texture wise, Sujiko has got a harder membrane as compared to Ikura. Love the popping moment on biting on the roe. One may need some efforts in bursting the roe in between teeth. Yum! Guess this is the only place that offers Sujiko?! Proof me wrong!

Thanks to the friendly Chef William for a short lesson; shared with us the differences and preparation of both sujiko and ikura. Chef also highlighted to us that sujiko preparation is pretty tedious and there are a few phases to make perfect sujiko. 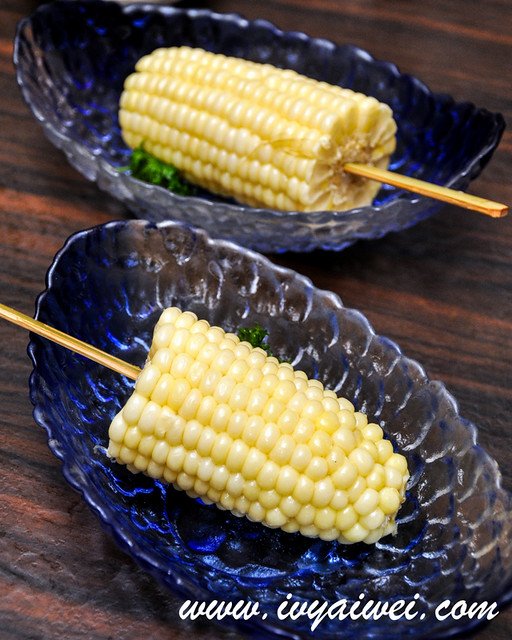 Pearl White Corn (Rm 20 for half slab)
The ultimate crunchy rich creamy sweet corn. Even it was steamed, the crunchiness still maintained. How I wish I can have it more often. It was super crunchy and totally cannot compare with any we can find locally. 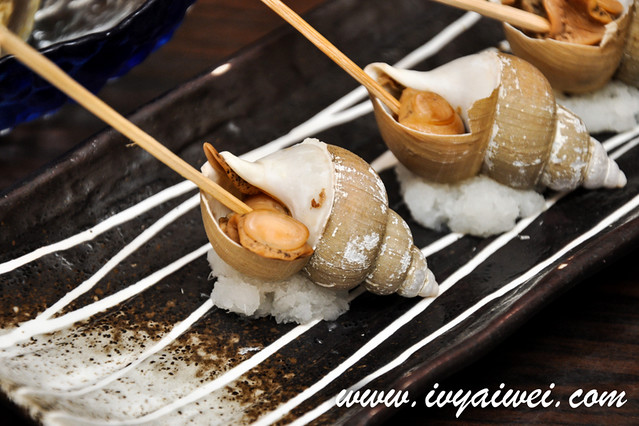 Shiro Bagai (Rm 35)
Or also known as Japanese Sea Snails. They were prettily presented and skewered with bamboo stick for ease of consumption. That’s really thoughtful of chef. The sea snail was firm and bouncy, with texture quite similar to the abalone. 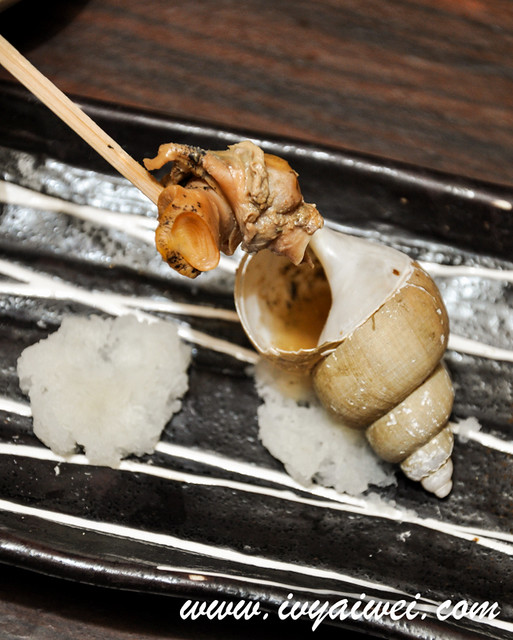 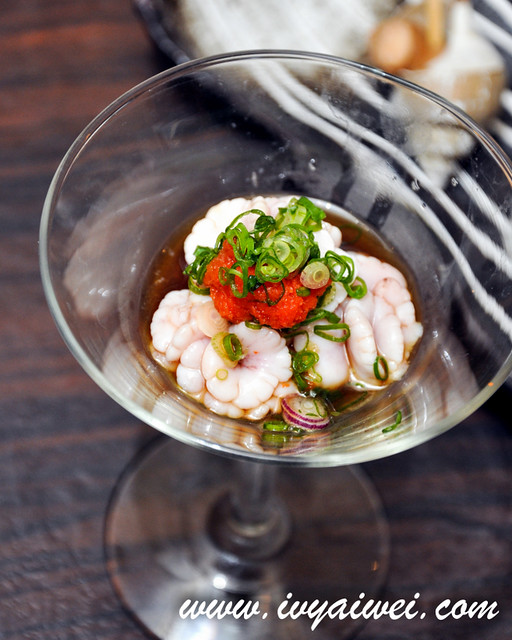 Tara Shirako Ponzu
Shirako is known as cod milt in English. Milt/Sperm… with a brainy structure. Weird?! I don’t think so and I madly fall in love with it. Okay, you might think I am weird but I have tried numerous odd food before that you might not wanting to know (Not insect lar, that one for sure I can’t take it); and I do not want to expose here or else you will say I am cruel. 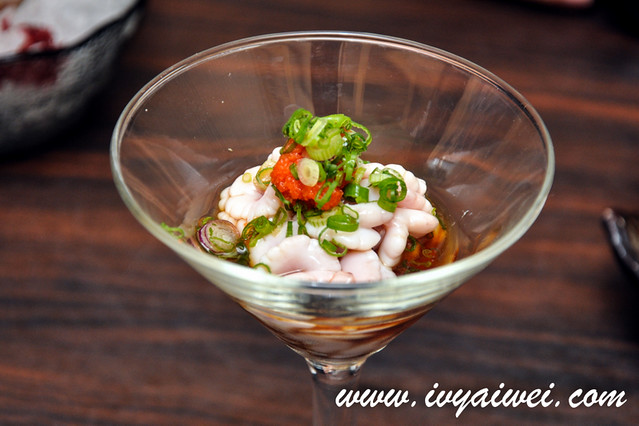 The cod milt has got the creamiest texture that I actually went ohh and ahh over and over again. I am not exaggerating. It was something superb; milky, creamy, buttery and melted right on the palate. Served with citrus ponzu for a refreshing ting. 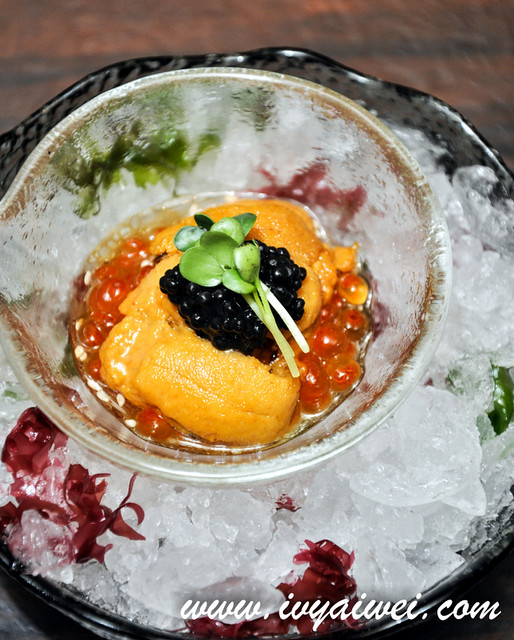 3 Roe Tartar
Another vibrant and colourful dish, prettily presented in a cocktail glass. The combination of caviar, sujiko and uni (sea urchin) was bursting with mega texture. The caviar and sujiko carried the popping effect while the uni was creamy and buttery smooth. 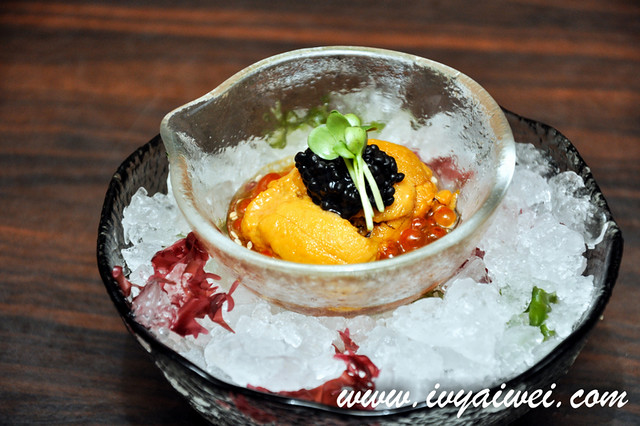 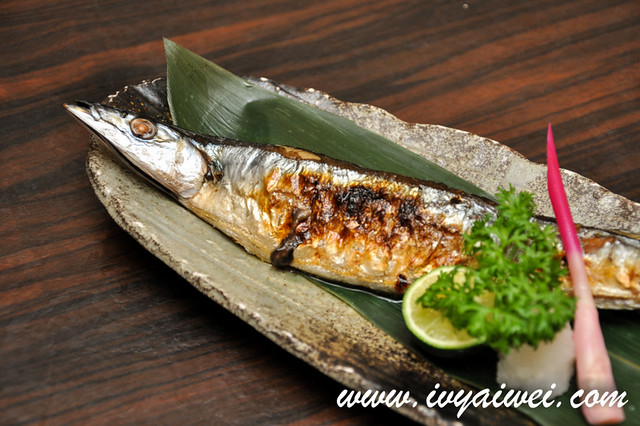 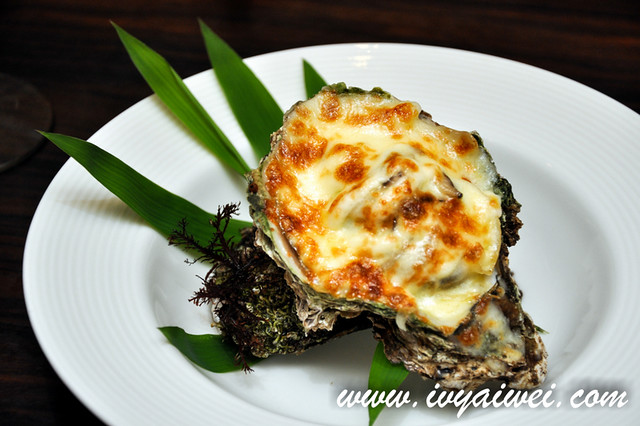 Baked Cheese Iwagaki
The Japanese Rock Osyter was huge very in size and appeared to be milky and briny; dosed with aromatic melted cheese. 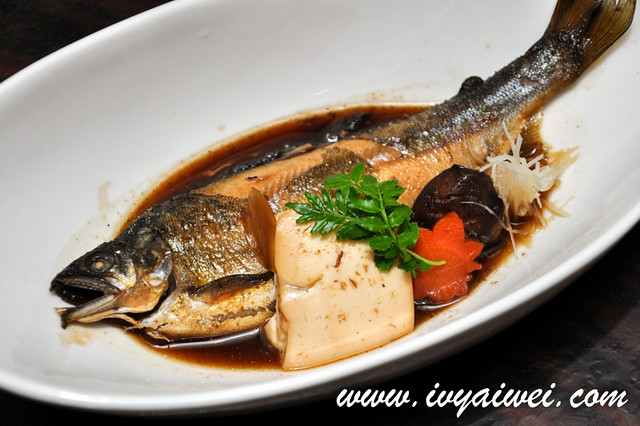 Komachi Ayu Nitsuke (Rm 58)
Also known as sweetfish due to the sweetness of the flesh. The fish is made with nitsuke method which is a very homey Japanese cooking method where simple simmering technique is used. It results a deep, sweet, savoury, gingery and umami dish. Sealed with lots of fish roes in the tummy, the fish itself was already very amai, with this technique, it doubled the sweetness of the fish. Personal preference, I think I like it done in a shioyaki way. 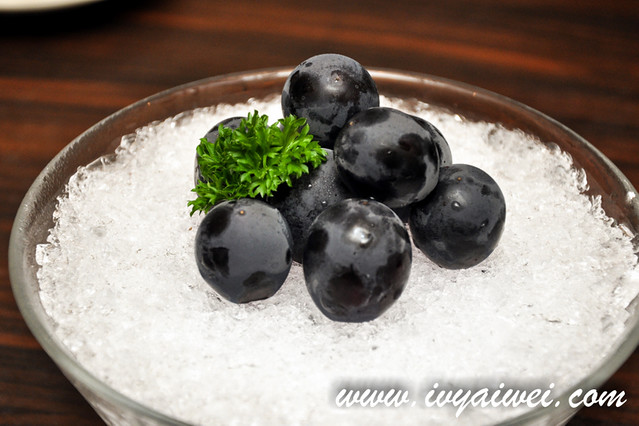 The after dinner fruits – Nagano Kyoho Grapes 巨峰ぶどう (RM38 per 5 pieces) or also known as giant mountain grapes were large, seedless, juicy, sweet and crunchy; dosed with a hint of wine flavour. 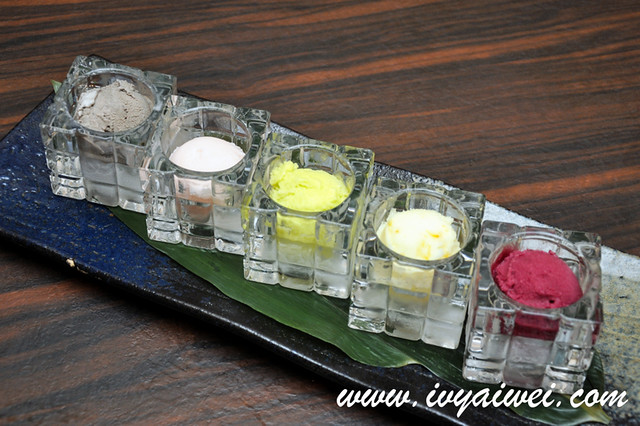 Sweet ending with imported ice creams/ sorbets – Goma, Momo, Melon,Yuzu, Kyoho grapes. I fancied goma and kyoho the most; aromatic and very flavourful. The others were very fragrant too but they were on the sweeter side. 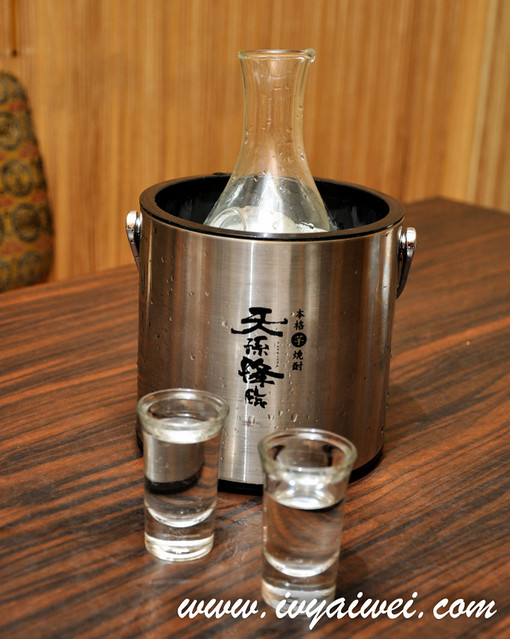 Last but not least, kanpai with Kinro 金露!!! 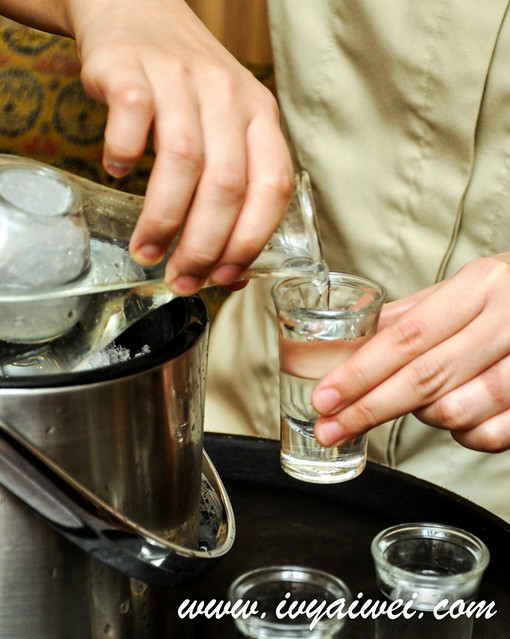